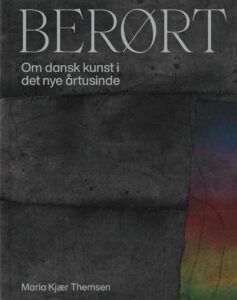 until today. After the turn of the millennium, we saw a number of young artists who achieved international star status with the speed of lightning, and who had to hire assistants in large numbers to keep up with the great demand. Contemporary art became hip, and Danish art flourished. But with the financial crisis in 2008, the market suddenly changed: Scores of galleries had to close, and the artists began to look for new paths. Touched tells about how art has developed over the past two decades both within painting, sculpture, installation art, performance, photography and media art and art in public space. The book is written by art editor at Dagbladet Information Maria Kjær Themsen (b. 1978). Kjær Themsen is, among other things, a curator, author of the monograph John Kørner / Painting (2016) and former art critic at Weekendavisen.